FUTURE OUTLOOK FOR THE AUTOMOTIVE INDUSTRY

The prospects for automobile production in Japan are rather mixed. In 2015, the total output of vehicles fell by more than five percent. It saw another decrease in the first half of the next year by more than three percent. The downward slide may continue throughout the current year. However, there are a number of possible boosts for the automotive industry. 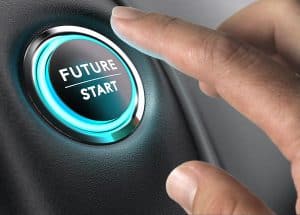 Finger about to press future button with blue light over black and grey background. Concept image for illustration of change or strategic vision.

Boosts to the Industry

First of all, the government has plans to boost infrastructure spending. This will especially be the case in the northeast part of the country. Therefore, there should have a positive effect on the market for heavy trucks.

Another boost to the industry should come in the year 2020 when the Olympics and Paralympics come to Tokyo. This boost should last from now until the time that the events are scheduled to take place.

A final boost should come from structural reforms that are being pushed through by the government. Such reforms include better business regulation as well as privatization. This should prove to be greatly beneficial to long-term business investment.

While overall automobile production decreased in Japan, auto exports continued to rise over the past two years. In the current year, that growth will be difficult to maintain. The markets in the United States, Europe and China are slowing. In the US, there may be a damper on the country’s efforts to improve trade not just there but elsewhere as well. However, carmakers in Japan are building inroads into India and good opportunities continue to be offered in ASEAN markets.

Even though the stronger yen is digging away at the profits and sales of car manufactures in Japan, the majority are still set up to take hold of such opportunities. For instance, recently Toyota reversed a previously made decision to put a hold on India investment. The company has also made the announcement that it has plans for new investments in a number of different countries, such as Poland, Mexico, the United States and Turkey. In the current year, the company has plans to move forward with a technology partnership with Suzuki. After all, the market leader in India is Maruti Suzuki, which is a subsidiary of Suzuki.

Also a priority this year is an investment in alternative fuels. This comes about as Toyota has plans to roll out a new hybrid powertrain all over the world. Recently, the automotive manufacturer has also gotten serious about electric vehicles