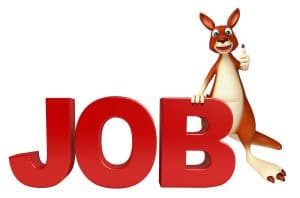 In March 2017, the employment rise in Australia surged. In fact, it was the greatest increase in full-time employment is nearly three decades. The recovering job market has combined with an increase in business conditions, which suggests that the economy is on the way to grow stronger.

Employment increased as much as 60,900 from the previous month and economists predict a gain of 20,000 this is good news for Seek Jobs. More people are looking for work as the unemployment rate remained at 5.9% just as was predicted by economists. However, full-time jobs increased by 74,500. An increase of this size has not taken place since December of 1987. On the other hand, part-time employment dropped 13,600.

Such indications of recovery in the labor market of Australia in combination with improved business conditions suggest that the country is on track for accelerating growth. It also shows signs that the record-low cash rate seems to be encouraging hiring and investment outside the resource sector.

It is important to point out, however, that the economy in Australia remains split. On the east coast in areas like Melbourne and Sydney, the cities are investing in infrastructure, experiencing gains in the population and boosting jobs. There is also a rise in housing prices as well. In other areas, especially in the north and west, people are leaving, property prices are decreasing and unemployment is on the rise. The dominant rise in jobs were in Queensland where the unemployment rate dropped to 6.3%

The chief economist for Australia at Capital Economics Ltd. Paul Dales says to take the employment surge “with a pinch of salt”. He says, “The fact that it was accompanied by a 64,900 leap in the size of the labor force suggests that the rise in employment has more to do with survey sampling issues than anything else.”