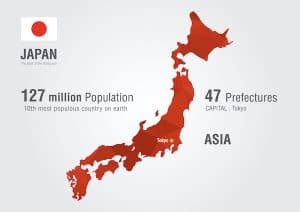 However, the global financial crisis occurred, one that impacted virtually every country and company in the world.  This was especially true in Japan, where those same companies were no longer hiring at the same pace as during the 2003 to 2007 period.  According to the Nikkei Economic Daily Newspaper, companies made 13% fewer job offers in 2009 as compared to earlier years, 34% fewer job offers in 2010.

There was another important realization Japanese companies made from the global financial crisis.   They needed to expand their recruitment horizons beyond Japanese shores.  Along with the domestic economic challenges, Japan’s population was declining, particularly when it came to younger workers.  Much of Japan’s population was getting older and leaving the workforce, while not enough skilled younger workers.

As a result, Japanese companies started to adjust their recruitment strategies.  One big change was that they started to hire more international students studying in Japan.  They realized that most of these students knew fluent Japanese, and they also had developed an appreciation and understanding of the culture in both professional and social atmospheres.

Another big change was that these companies started to hire more international students studying overseas.  Many of these companies were starting to expand beyond Japan into China and other Asian nations. They started to search for students who had proficiency in two languages. As well as a global mindset when it came to business principles.

Japanese companies still hire graduates from Japanese universities, but also look for those who have overseas experience. Largely for the same reason that they hire international students studying overseas.  Having proficiency in at least another language (especially English). And to show developed intercultural communication skills and having a global mindset.  When it comes to business principles to assist Japanese companies looking to expand their operations beyond the Japanese market.