THE IMPORTANCE OF SOCIAL MEDIA IN TODAY’S RECRUITMENT 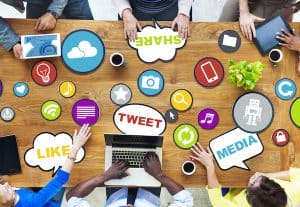 One time ago when a person was looking to be hired by a specific company, he/she would fill out and submit the application form. Then schedule to have an on-site interview at the company’s location.  Then wait to see if they had been hired or passed over.

However, in the age of the Internet and social media, there are not many companies that do this type of recruiting process.  Very few millennials (born between 1980 to 1999) encountered the traditional hiring process, and virtually no GenZers (born in 2000 or later) will encounter this.

Many of these younger generations want to work for companies that stand out for something that they believe in. This is a critical factor in their motivation to work for any business.  As a result, companies have to show that they don’t just advertise on social media; they have to show that they are behind a cause (i.e. preserving the environment, helping starving children, preventing animal neglect, etc.) and actually live up to the ideals of that cause to get millennials and GenZers’ attention.

Most younger generations spend a great deal of time on social media, especially on popular platforms such as Instagram and Snapchat.  These two platforms that focus greatly on visual media.  This means that companies have to not just write what they are about and why they are a great place to work but show it through photos and videos.  If businesses fail to do this, they have little chance to acquire the upcoming talent of future generations.

How to Hire and Attract New Employees