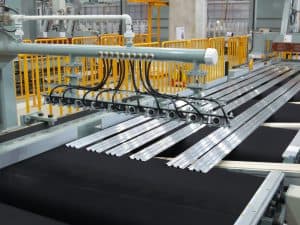 Somewhere close to twenty different types of die-casting aluminum alloy are identified in accordance with the Japan Industrial Standard. About ninety-four percent of the demand for Japan in the current fiscal year was made up of ADC12 alloy. This specific material is used in transmission cases as well as engine parts. In the foreseeable future, ADC12 should continue to make up close to all of the ADC ally demand in Japan. This is according to the Japan Aluminum Refiners Association general affairs director Koh Morimoto.

The Japan Aluminum Refiners Association stated that both the commercial and passenger vehicle production in Japan would increase as much as 1.6% in the upcoming fiscal year. On the other hand, the Japan Automotive Manufacturers Association has predicted that there will actually be a decline of 0.8% down to only 5,000,300 vehicles.

Morimoto claims that during the latter half of the current fiscal year, the launches of the new automotive models would push up the demand for vehicles. He anticipates that this is a trend that will continue on into the approaching fiscal year.

The Japan Aluminum Refiners Association also said that the demand for casting aluminum alloys is also expected to see more than a two percent increase to 352,600 MT in the new fiscal year. This is primarily for the automotive industry as well. According to Morimoto, there are more than forty different types of AC alloys in Japan.

There is no increase expected in the demand for secondary aluminum alloy sheets. This is the material that is used for cans that contain beverages. This figure is expected to remain flat at 201,900 for the 2017-2018 fiscal year.

Aluminum alloys are used by steel manufacturers for deoxidization. There is an increase in demand of 1.3% expected in this sector to 116,300 MT. The reason for this is that the crude steel output in Japan anticipates an increase in the coming fiscal year.